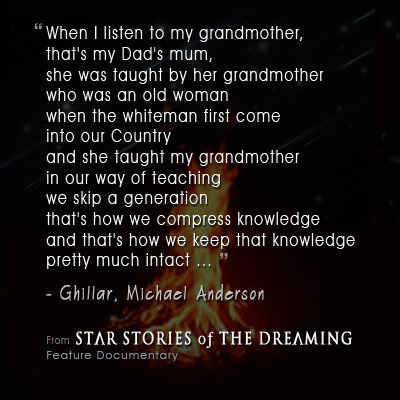 STAR STORIES of THE DREAMING

When the ancient wisdoms of the universe held by the oldest culture on earth meet modern astrophysics a new concept is born - cultural astronomy.

Increasingly Aboriginal people in Australia are being recognised as the first astronomers.

In the meeting of minds between Prof Ray Norris, CSIRO astrophysicist project leader of the Evolutionary Mapping of the Universe (EMU) and Ghillar extraordinary parallels emerge in the two cultures - such as 'wormholes' and the pathway to Bullima, the Euahlayi Sky Camp, via the hollow Coolabah tree.

In Star Stories of The Dreaming Ghillar Michael Anderson shares publicly for the first time teachings passed to him as the knowledge holder for his People, the Euahlayi.

Star Stories of The Dreaming includes the Euahlayi Stories for:

▪ Wirrawilbaarru – Whirly wind – Bad spirit travels inside whirlywind – lives behind Scorpio and entry in and out is through black holes in Scorpio;

These are phonetic spellings of Euahlayi words